Maximising Situational Awareness - making more effective use of the PPU 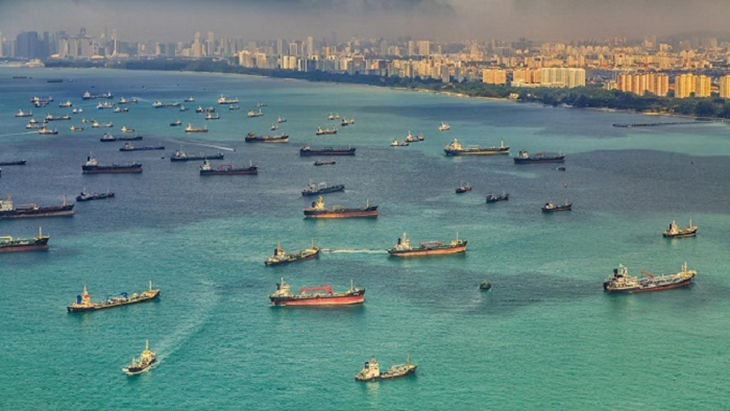 The article is written and contributed by Paul Stanley who is a consultant for Portable Pilot Units and maritime navigation. It was published in the latest issue of Seaways(a widely read magazine of the Nautical Institute) and the New Zealand Marine Pilots Association journal called The Pilot.

Although pilotage has traditionally been conducted visually, ships frequently need to be piloted in conditions where vision is impaired by environmental conditions. In such cases a pilot’s situational awareness may be heavily compromised unless other information sources are used effectively. We all recognise ‘restricted visibility’, in conditions of fog etc, and change to other pilotage methods, but the most common cause of reduced situational awareness that pilots face is impaired vision due to darkness.

As Captain John Clarke described very comprehensively in the June edition of Seaways, not only are many of the familiar visual cues absent altogether at night, but the human eye is also extremely inefficient in the dark – compounding the problem.

A major improvement to situational awareness can be achieved through use of a good quality Portable Pilot Unit (PPU). Although PPUs have been in use for over 20 years, and many pilots have one available, we continue to see instances where ships have run aground, or had near misses, when proper use of a suitable PPU could have been a major help in preventing the errors that led to the ship being in an unsafe position.

This article will identify how increased use of PPUs can compensate for loss of visual information by night and day; it will also explore how PPU use can also improve the accuracy and safety of pilotage in all conditions.

Some incidents which have involved loss of situational awareness at night are very well-known, such as:

Port rudder was applied but ‘too little, too late’. The pilot, concentrating on the ROT indicator, belatedly recognised that the ship was much further South than intended. With the aid of multiple tugs, the drift to the South was arrested with the ship well outside the fairway and possibly touching the bottom. The pilot had elected not to take a PPU with him on this job, despite the size of the ship, and was navigating primarily by visual means.

Common features identified in the relevant investigation reports for all these incidents include lack of a shared passage plan/mental model, failure to use available electronic aids effectively, and failures of Bridge Resource Management (BRM). Ravi Nijjer, of Marine Consultancy Group Australia, a major advocate and trainer for BRM, commented in relation to these and other pilotage incidents: “Evidence indicates that most of them show overreliance on visual navigation, local knowledge and pilot’s intuition, and that a PPU wasn’t used even though one was available”.

The examples quoted above were deliberately chosen because they happened at night. As John Clarke noted, commercial airline pilots require instrument ratings for flying at night, but night pilotage is rarely treated as a special case and even the largest ships’ arrival and departure times are often determined only by the tidal window available.

How can pilots manage the hazards?

Electronic pilotage techniques are a major aid to night pilotage. To be effective, though, the plan shown on the ship’s ECDIS and ARPA must be the same as the pilot is working to – which means the pilot’s plan needs to be communicated to the ship well in advance of the arrival/departure: providing the plan during the MPX is far too late! This is also true, of course, for daylight passages.

Unfortunately, even with a common plan and a shared mental model, it is all too common for the pilot to receive very limited support from the rest of the bridge team.

Consequently pilots become potentially a single point of failure and need to maximise their own ability to monitor the passage by alternative means. One of the most effective ways of doing this is to use a PPU.

Most portable electronic aids for pilotage, whatever their overall level of sophistication, are referred to as  PPUs, but for the purposes of this article only high-level units with independent position, and at least semi-independent heading and ROT, will be considered. So-called ‘PPUs’ which derive own-ship position from the Pilot Plug are specifically excluded and the International Maritime Pilots Association (IMPA) cautions strongly against using them, not least because data derived from the pilot plug is not independent and will, at best, merely duplicate any errors from the ship’s sensors. (http://www.impahq.org/admin/resources/guidelines.pdf) 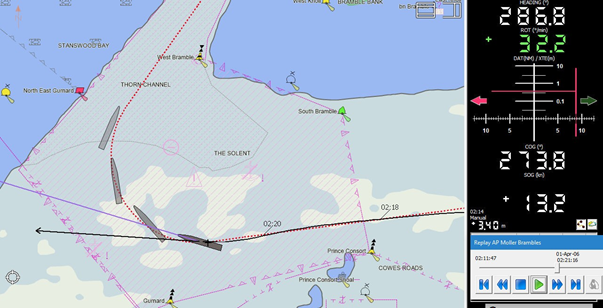 For pilotage, one of the most valuable inputs into an electronic charting system is accurate ROT, with software that is able to use it in conjunction with position, and course/speed over the ground to predict future positions when turning. High-level PPUs all have this ability, whereas not all ECDIS systems do (and some older ships’ gyros do not even generate ROT anyway). In each of the earlier examples of groundings, a PPU would have given early indication that all was not well; in the cases of CMA CGM Vasco de Gama and Leda Maersk, they did just that, but it seems no one was paying attention to them.

For comparison with the CMA CGM Vasco de Gama incident report, Figure 1 is a screen shot from a recording made by the author in 2006, during a PPU demonstration. It shows a 347 m container ship rounding the Brambles Bank into Thorn Channel; although the track shown was not in use at the time of the recording, but was added later by the author to illustrate this point, the display shows the mid-point of the ship is 8 m to starboard of track, and predicts that if nothing changes she will complete the turn in about 3 minutes – safely but slightly to port of track, so the pilot should increase the ROT if possible.

PPU use on every ship is becoming the norm in many ports. Whenever using a PPU, its operation needs to be second nature: it is dangerous for the pilot to be fiddling around with the equipment at critical junctures. After initial training, it is using the PPU on a regular basis – on every trip – that builds the necessary familiarity and competence.

Using the PPU on every trip also serves to build the pilot’s confidence in the performance of the equipment – knowing its reliability and accuracy. Having the PPU at the conning position also gives the pilot instant access to accurate heading and speed without having to ask, and shows present and future positions on the chart without having to leave the preferred position. Subsequently, PPUs give pilots the potential to review individual jobs while they are fresh in the memory, and that is invaluable in terms of improving performance. Indeed, the Cambridge Handbook of Expertise and Expert Performance concludes that superior performance comes from deliberate practice and regularly obtaining accurate feedback. The PPU provides that accurate feedback.

When the PPU is used for every pilotage, it becomes the one constant factor which doesn’t vary from ship to ship: it is the same familiar equipment, operating in the same way

A good PPU compensates very effectively for the deficiencies that can be found with bridge teams and can provide the pilot with a very reliable, and potentially invaluable, ‘second opinion’ when it is most needed.

For some ports, particularly those handling large, unwieldy bulk-carriers with critical under-keel clearance requirements, the PPU has already become the main reference for pilotage. As with every other aspect of navigation it must not become the sole source but must be used with whatever other information is available – be that visual, ECDIS or radar.

Other benefits from PPU use

It is worth noting that there are a number of situations where the PPU is able to provide really useful information that is not readily available by other means:

– and much easier than monitoring it on radar when otherwise conducting visual pilotage. See Figure 1 again.

Note that MSC 191/A allows alternative locations to be used instead of the CCRP as necessary, where clearly indicated or distinctively obvious (as is clearly the case with the PPU).

This is illustrated in Figure 2, where an LNG carrier is entering Port Hazira in India at low speed with a 2 kn. cross-current. Although the centre of the vessel is on track, the whole of the bridge – and therefore the CCRP – is to port of the leads.

Efficiency Gains from use of PPUs

There are many ways in which PPUs can improve port efficiency; though of course avoiding major navigational incidents is a major contributor to efficiency anyway!

PPUs can help considerably in removing some of the constraints which might otherwise limit shipping operations:

There are countless other ports which have also benefitted. In every case, though, it is because they have accepted that new technology enables them to expand their operating envelope; to do this they have to overcome the mind-set which says ‘…you should never do anything with a PPU that you cannot do without it’.

Additionally, PPUs provide a very valuable aid for training new Pilots, who can be debriefed immediately after completing a job using the playback as a reference.

At risk of whistling up a storm, I suggest that the best way to achieve safe and efficient pilotage is to minimise the variables from job to job by always using the same prime source of information – a PPU. If that is a bridge too far, which I’m sure it will be initially for many pilots, at least make the PPU your prime secondary sensor – and in all cases provide redundancy by having exactly the same plan show on the ECDIS/ARPA.

It is important, though, that pilots’ skills in other forms of pilotage do not atrophy due to over-reliance on a PPU. Visual pilotage and radar blind pilotage need to be practised regularly, but with the PPU acting as a back-up and providing a record of what was achieved for subsequent playback and analysis. Indeed, the best pilotage will undoubtedly be achieved by using two methods in tandem and verifying one against the other regularly – scanning systematically between them.

Even the best equipment in the world is of limited value if those using it cannot operate it properly. Ship’s bridge teams should be competent in operating their own equipment, though sadly that is often not the case. Pilots will be the sole operators of their PPUs and it is essential that they have proper training both in the general principles of PPUs and in the specifics of their own equipment.

The IMPA guidelines for PPUs include a section on the factors to be considered for PPU training.

Similarly, no equipment can be 100% reliable. Pilot companies need to carry out periodic checks of the performance of their equipment, and the manufacturers are best placed to advise on how that should be achieved.

You can download a copy of this article by clicking here.